In 1969 the United States put a man on the moon. As the end of 1970 approached the US Space program was winding down and inflation and 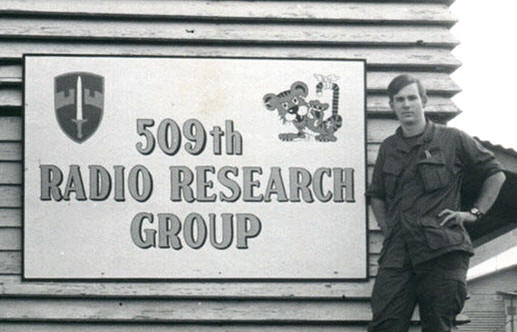 budget cuts forced drastic declines in funding. Engineers were selling used cars, pumping gas, and reportedly riding dump trucks in NY City as unemployment soared. I figured it was a lousy time to be an engineering student, so I tried a semster in business school. I didn't enjoy it and my grades reflected that fact. I knew if I quit school and took a job I would never return to college. I called the draft board in early November and asked how high they expected to go in the draft lottery that year. They said they were planning to draft up to number 144. My number was 142.
I fooled then by enlisting. I reckoned that I could park myself in the Army for a few years and hope that the economy would improve, or that I'd develop other interests. Neither happened, but I got to see South VietNam in the meantime. I was at the 175th Radio Research Field Station in Bien Hoa for eleven months, and then spent a final month "in country" in Saigon at Davis Station. [trivia] James Davis was the first American to die in combat in VietNam. He was also in a Radio Research unit, and Davis Station was named after him.
I arrived in VietNam in mid-October 1971 and departed a year later. I served another 18 months at Vint Hill Farms Station in northern Virginia, then went back to college on the GI Bill. I finally got my degree in 1976 and, considering the usual ups and downs that life hands out to everyone, things have gone okay since then. 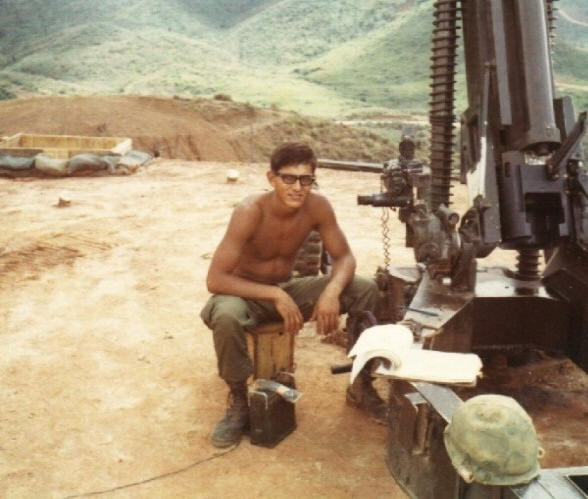 He was drafted into the Vietnam War in 1968 as a member of the United States Army. He received a bronze star for his courageous efforts over seas. He was honorably discharged from the Army when he completed his service in October 1971. He came home to marry his wife, Vicky, for now of 39 years in June 1971. 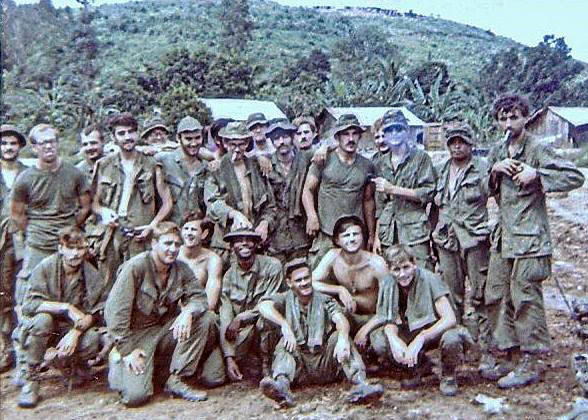 These always will be "My Brothers in Arms."

David is on the right. 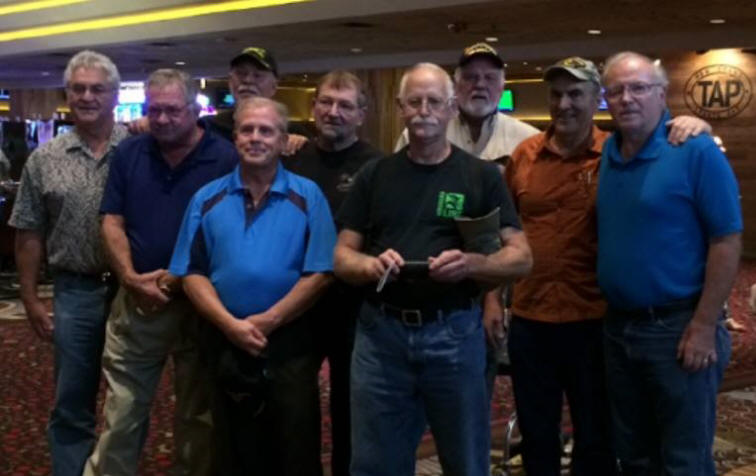 "Just returned Thursday (2014) from a reunion with 8 other members of my old platoon in Las Vegas. It was a great time with old friends. We had a reunion in Deadwood, SD in 2009. This is our second time to get together. We had a couple more attend this year and hope to find more of the vets from our unit. These were and always will be "My Brothers in Arms." (David is in the light shirt and beard on back row of recent picture.) 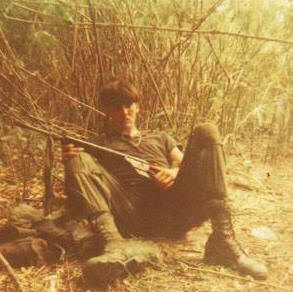 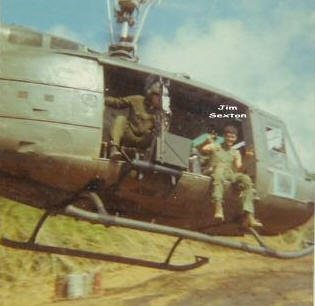 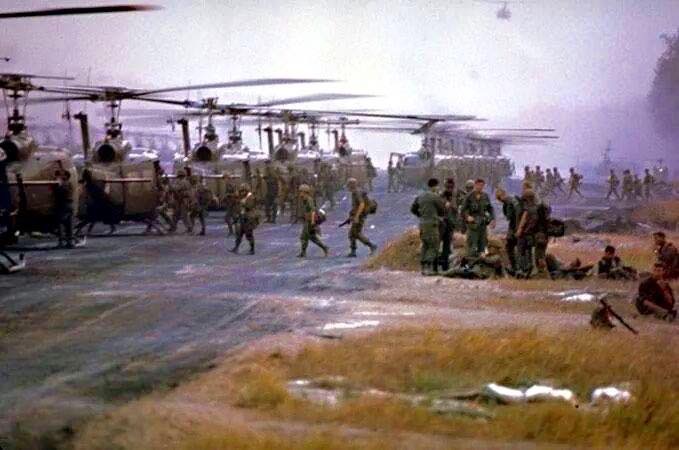 It's hard to believe it has been 50 years since I did this crazy stuff. I still think of my fellow grunts left behind and their ultimate sacrifice. First picture is preparing for a combat air assault on the flight line. Next two are how we jumped into landing zones (LZs). I borrowed these pics from Co. C 1/5 Inf. 1st. Air Cavalry Division. I served with Co. D 2/5 Inf. 1970-71. 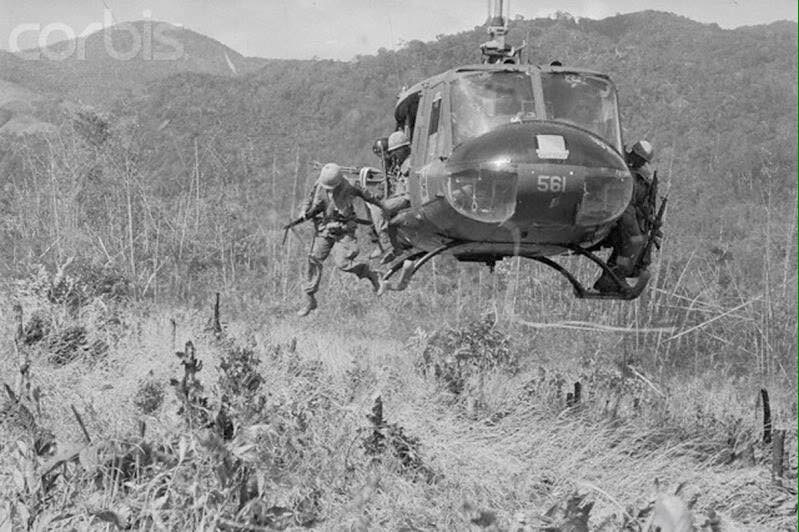 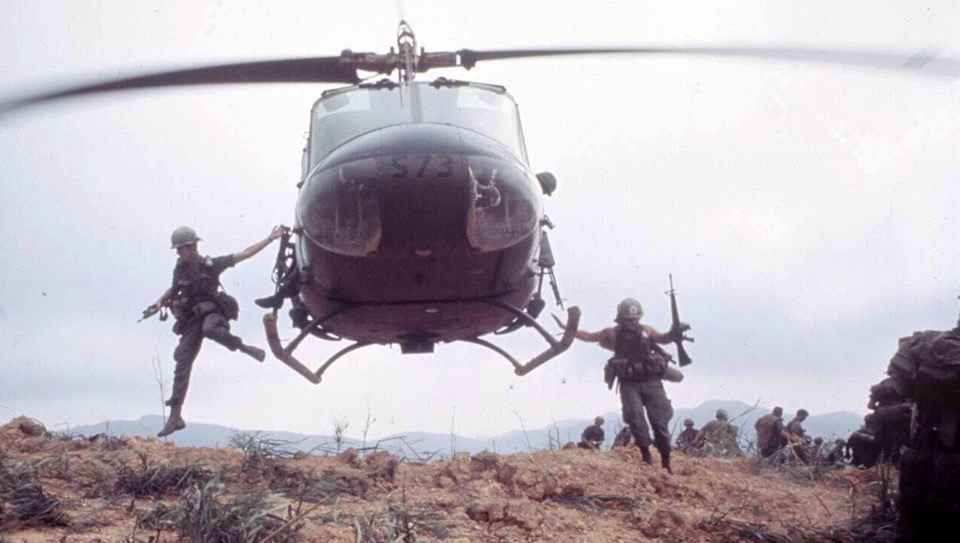 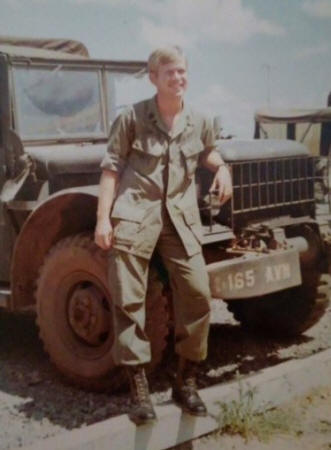