MAIL CALL
from Betty Bernauer Wademon in Sugar Land
Nov. 9
Ron and I just returned from a wonderful trip to Croatia with Dwayne and Kay (King ) Young. We spent 12 days exploring the country on our own. The history of Croatia is fascinating since the last war was only in 1991. The Roman and Venetian ruins were well preserved throughout the country and many used in the series Game of Thrones. The water is beautiful, people friendly and food delicious. It was a well needed vacation that we had postponed from last spring when I broke my foot "significantly". Walking sticks were a big help.
bbw1m@aol.com

from David Lapham in Sunset Valley, TX
Nov. 17
I always enjoy reading about what others are doing, and having been a newsletter editor for a couple of clubs in the past I appreciate the efforts you make to keep everyone informed. Of course, I also know from experience that it can be tough at times to ‘acquire content’. Not that I’ve been doing anything particularly fascinating recently, but keeping that in mind I submit the following: First let me say that everything right now is going well. I was diagnosed with a somewhat rare/unusual liver disease (Primary Sclerosing Cholangitis) several years ago. There’s no cure other than a liver transplant and I think the longevity expectation after diagnosis is something just over 20 years, some studies say less. My doctor told me by the time I needed a transplant I’d be too old to get one. This was naturally quite disheartening but I’ll just jump to the happy ending. After a couple of years my gastroenterologist noted that my symptoms weren’t progressing as rapidly as anticipated and my liver tests kept coming back as normal. I was on some medication but it was still expected I’d start going downhill at some point. I was sent to a liver specialist who, after a year of medication changes and quarterly lab tests informed me, I no longer required her services.
There’s more detail, but the summary is that if I indeed have this disease it is either in remission or progressing very slowly. After I was diagnosed, I cashed in my pension, but I’m now making plans to live quite a bit longer. In the meantime I’ve gone through a knee replacement (injury rather than arthritis so only one knee), some shoulder surgery (doc said I had clearly abused it throughout my life — maybe that motorcycle wreck while I was in the Army?), ankle surgery (a long, boring tale which also has some roots in the previously mentioned motorcycle accident), and the usual stuff that occurs with the blessings of advancing age. I retired in 2006 at age 55, and these days I’m working at having as much fun as I can stand. My wife & I go dancing frequently and I also meet up with John Wilson periodically to hunt. We hunted ducks and small game back when we were students at TJ.
David.lapham@gmail.com

from Cynthia Marshall Devlin in Zavalla, TX
I guess many mid-county folks spent Thanksgiving elsewhere when the TPC blew up. All my family came to our home and to my Dad’s old cabin. We were supposed to be at my nephew’s new home, but the door frame blew out! I cooked and we enjoyed the 7 children. I hope everyone had a nice holiday on the 28th and I hope no one had damage to their home.
cynjad@msn.com

TPC (old Neches Butane Plant) EXPLOSION in PORT NECHES
An explosion occurred at the TCP chemical plant in Port Neches, Texas near Texas’ border with Louisiana, on Wednesday, November 27 at

about 1 a.m. (2 a.m. Eastern) on 27 November 2019. Reports state that only three people sustained minor injuries and all workers at the plant having been accounted for. Orders for mandatory evacuations for Port Neches, Nederland and Groves came later in the afternoon after another explosion happened at 2:00 pm. Citizens were allowed to return on Friday, November 29. A shelter in place was later ordered after the air quality tests warranted it.
(Please write and tell us your experience from and since the explosion.)

NEWS FROM THE HOMEFRONT
My annual Black Friday “take it easy” day with Martha Lipe Bodin fell through. She had to attend a funeral in Mississippi. So, I used the day to decorate for Christmas before my surgery that was scheduled for trigger finger the following week. The surgery at Fondren was minor and my hand is healed enough to write this newsletter. Martha and I did just come back from a two-day trip to Lafayette. We visited a wonderful Cajun 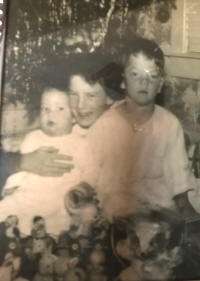 village and museum in Vermillionville in the Lafayette suburb. That night we went to a Christmas concert to listen to a nun’s choir. They are the Daughter’s of St. Paul housed in Boston. But, each of the nine nuns are working in convents across the nation. Each one was introduced between their songs and told the audience their story and where they were from originally. Well, the youngest one happened to be from Loreauville, LA (my dad’s hometown) and is a distant relative. How cool is that?
Murphy said to tell ya’ll that he went hunting in Goliad not Gonzales. Oops. He is hunting at his regular East Texas “beer lease” this weekend in Wiergate.
We were to have spent Thanksgiving at Murphy’s nephew’s home in Port Neches off of Saba Lane. Obviously with the explosion, they had to evacuate. They went to my sister in law’s home in Bridge City. We had our lunch gathering there. Many of our classmates were affected by this and many more classmates opened their home and hearts to families and friends in need.
This is my first Christmas without my big sister, Gerry. She loved Christmas even though her husband didn’t. So, she would spend a lot of time at my house during the holidays just to be around the festive decorations and merriment. Miss you, Gerry.

Nov. 9
from Jan Russell in Houston
As I read what I had written in the email or Facebook that you saw I was appalled at all the errors! Ms. Smith and Ms. Golman would really get after me! Ha ha! Most of the time I have to use the microphone to post what I want to say because I’ll still struggling with words. What I think I said is not close to what I have actually said! Qué lástima! I am getting better, although the neurologist has told me I still can’t drive and that I must take a driver’s test first! That might be in January. It’s driving me crazy, but I’m being a good girl and doing what the doctor says! Thanks again to everyone for their kind cards, wishes, and prayers.
(Jan making wonderful progress since this note was written in early November.)
Janrussell49@att.net
10225 Wortham Blvd. Apt. 5104
Houston, TX 77065

from Joel Levy in Houston
Nov. 12
Because we are often sharing support of each other for medical issues, I'm having one, a low cervical laminectomy and microdiscectomy, tomorrow morning. My question is how long does it take to get over this enough so that I can go back to my sedentary desk job, when it is described to me "as minimally invasive?".
(update)
I was recently released by the surgeon to do whatever I am able to do, but keeping in mind that I will have to have physical therapy but I will be all done by the middle of February when our daughter gets married!
docjkl@msn.com
5534 Hummingbird St.
Houston, TX 77096

from Mikey Varing in Port Arthur
Nov. 13
Tomorrow I'm returning to MD ANDERSON'S HOSPITAL in Houston for surgery to my right prosthetic knee to remove the plastic cushion and replace it with a new one. Then they had to irrigate and treat to prevent any more infection. Since I had my surgery repairing my broken right femur and removing a fourth stage malignant tumor, my knee built up fluid and the pressure caused a hole to blow out of a weak spot at the scar line. This surgery will prevent any more infection in my knee. I want to thank all of you for your prayers and concern.
Nov. 27
I had to return to MD ANDERSON HOSPITAL for another surgery on my right knee and after a two and half day stay, they transferred me to MAGNOLIA MANOR in Groves. I'll be here for at least five weeks. Our Precious GOD has been with me the whole time. First, I want to thank each and every one of you for your loving prayers, beautiful words of encouragement and your visits even from some friends I haven't seen for years. I truly can't put in words how much this has touched my heart and overwhelmed me. I had no idea I had so many loving and caring friends.
Varingmichael32@gmail.com
749 Queen’s Court
Port Arthur, TX 77642

Dec. 3
A note from Liz Tieskens about husband, Butch Ellis
Prayers needed! Butch has had another stroke...a rather large clot that they are trying to dissolve or break up with meds; they have also transported him by helicopter to another hospital where they are currently doing a catheterization to break up or remove the clot. We are here now and awaiting word.
(update)
Update at 5:00pm- so far so good! Neurological signs are quite good; main concern is potential bleeding probs, due to the "blood thinner on steroids" he is on. He is lying flat for 6 hrs. The cath went in through the groin into the brain(unbelievable). Clot was removed, artery opened. Speech is much improved. They are extremely pleased with his progress. I will try ice chips and jello in a bit to check his swallow. Keep praying. Thank you all for your thoughts, your prayers, and your loving support.
Dec. 5
Going home!
liztellis@gmail.com
358 Elk Trail
Lafayette, CO 80026

Allen Andrus reports that is doing very well as he recovers from his cancer. His wife, Shelly, is recovering from rotator cuff surgery.
CONDOLENCES
Kenneth Howard
(death of a classmate)
Nov. 20, 1949 – Aug. 28, 2019
Kennethhoward1@bellsouth.net
3601 Whispering Woods Dr.
Lake Charles, LA 70605
(Thanks to Janis Hamilton Lee who forwarded the information about Kenneth’s passing.)

Mr. Foy Lynn DuBois
(faculty member of Woodrow Wilson)
Jan. 19. 1931 – Feb. 26, 2019
A note from Robert Sandoval:
When all the kids were enjoying Christmas vacation we were doing note cards for a term paper. Seventh AND eighth grade.
(How well I remember. My 7th grade Texas History research paper on Stephen F. Austin was 35 pages and he wrote, “Repetitious”. It was the first time I had ever heard the word! But, I remember that it was written in big RED letters.)
(Thanks to Robert Sandoval for sending this information about Mr. DuBois’ passing.)

I was so pleased to get mail from classmates that felt “my pain” of not getting “news”. Thanks also to the classmates who reached out about the deaths I reported. You are truly appreciated.

May you have a Merry Christmas, Happy Hanukkah and Happy and heathy new year!