The only story to tell is about Donnie. He was stationed at Ft. Benning. During one of his parachute drills, Donnie was making his second jump, he was the last man out the door, but the first man to hit the ground. He had a May West when he jumped. This is when your parachute looks like the movie star's breast. He said a prayer to God for his reserve chute to open. It did open, at 100 feet before he hit the ground. If his chute didn't open he would have obviously had been killed or hurt badly. May West was the name WWll paratroopers gave to that chute in that situation.
Ronnie and Donnie each made 22 jumps out of airplanes, jets and helicopters. 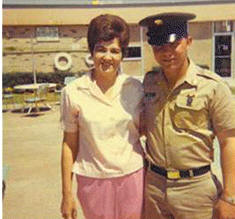 Ronnie with his mom, Jean, at Fort Sill, Oklahoma 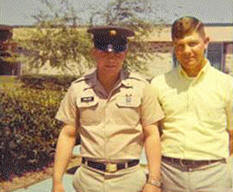 Ronnie with his twin, Donnie, at Fort Sill

Ronnie with his dad, Ivan, at Fort Sill 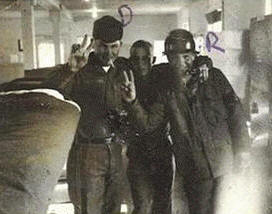