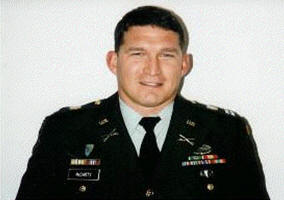 Matt was commissioned as a 2nd Lieutenant when he graduated from Texas A&M University in May 2003. Upon completetion of the Basic Armor Officer Dourse in 2003 he was assigned to the 1st Brigade Combat Team of the 1st Infantry Division based at Ft. Riley, Kansas. The 1st Infantry Division is known as the "Big Red One" based on their unit insignia. The 1st ID is probably best known for the invasion of Omaha Beach in Normandy, France on D-Day. In February 2004 Matt completed Ranger training at Ft. Benning, Georgia.
Immediately after he completed training he was deployed to Iraq where he served as a Platoon Leader while the 1st Brigade was based outside Fallujah, Iraq. In late 2004 Matt's unit was redeployed to Ft. Riley. What a tremendous relief to see him along with 200+ other heroes returning home safely to the U.S. on the evening of Sept. 11 2004.
Matt was promoted to 1st Lieutenant in late 2004 and he has served additional assignments at Ft.Riley including Executive Officer for his unit, a Cavalry Troop. In July 2006 he returned to Ft. Knox, Kentucky and began the Amored Captain Career Course which he has just completed in mid-December. My wife Sandy and I attended the Graduation Ceremony. After one additional short course in January he will return to Ft. Riley and will be assigned to lead a unit that is training other soldiers for duty in Iraq. 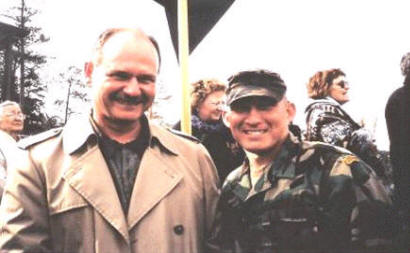 Fred with son, Matt, at the Graduation Ceremony. Matt, has his Ranger Tab pinned on his upper left shoulder of his uniform. 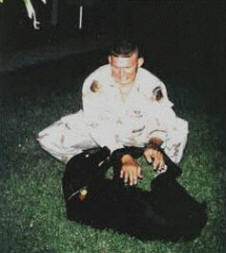 Matt is reunited with his black labrador "General" upon
his return to Kansas. 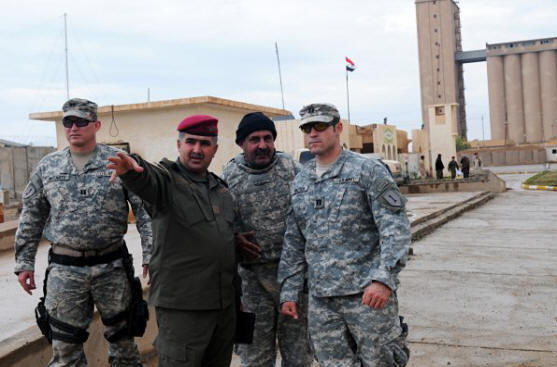 Matt is on the far left and another US Army Captain is on the far right, An Iraqi officer (maroon cap) is explaining some aspect of the current security situation in the city. The man in the black cap is an Iraqi interpreter. Matt is currently serving as the Commanding Officer of B Troop, 1st Squadron-4th Cavalry Regiment. Location - Northern Iraq

Cody Huebel is the son of classmates Harry Huebel and Pat Williams Huebel. He is a general mechanic with the U.S. Army, stationed in Camp Casey, Korea.