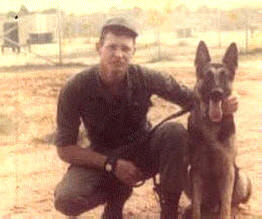 I enlisted in the U.S. army in 1969 and served two tours in South Viet Nam walking a dog during during 69-70 & 71 and was discharged after that three year enlistment as an E-5, Sergeant."
(Also see Ricky Bradley on Coast Guard page) 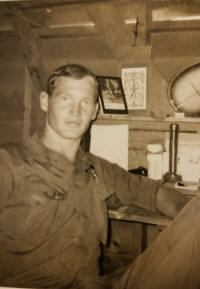 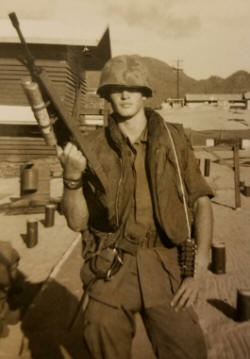 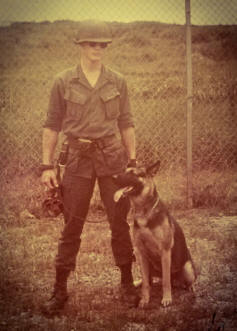 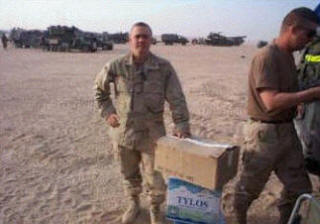 Chris Forest is a Captain in the U.S. Army. He served a year in Iraq (March 2003 - March 2004 and is now the Commander of the 252nd Signal Company at Ft. Gordon, GA Chris is the son of Sharon Lewis. 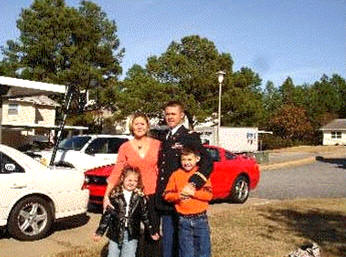 Chris and his wife, Lynn, with their two children - Rachel 6 and Andrew 9.

Jim Forest is a retired Army CW04. He was a helicopter pilot and served in the army for 20 years. The husband of Sharon Lewis.

Two years ago today we laid my husband, Jim in the Arlington National Cemetery. There was a blizzard going on, Washington DC was literally shut down and that morning it was doubtful whether the ceremony would even be possible. But, as a result of the dedication of the US Army Caisson Platoon, 3rd Infantry Regiment (The Old Guard), and the love and support of so many family members and friends who were willing to travel so far to brave blowing snow and slush, we granted Jim's longtime wishes to be buried in Arlington. It was one of the saddest, yet proudest, days of my life. I miss him every minute of every day, but I know my sweet husband and hero soldier rests in peace among his comrades in arms. 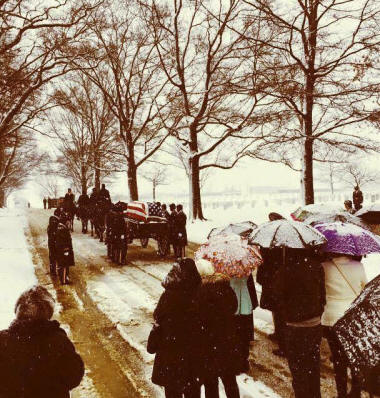 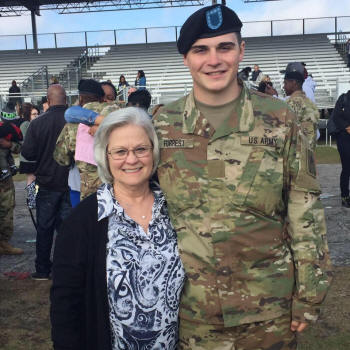 Hello to everyone! I am your classmate Jenny Rhodes, married to Harold Hamilton and living in Lumberton, TX. I want to thank you in advance for visiting the Military link and asking you to please pray for our military and our government leaders every day.
My only child, Matthew Philip Brown was born in Augsburg, Germany, December 19, 1972. His dad was a Czechoslovakian linguist in the Air Force at the time. I only mention his birthday because the day held a happily improbable event. Shortly after I left the recovery roon our classmate Patty Marshall also gave birth to a son, Marshall Byant, in that very hospital. We shared a room for several days in that foriegn place and I have never forgotten the goodness of God, that he sent Patty to be with me there. Neither of us any family in Germany other than our Military husbands. It was comforting to share that experence with a friendly face so far from home. Thank you Lord!! Since that unexpected meeting in Germany, I have not talked to Patty again.
So if you read or hear of this Patty, I want you to know that I've thought of you and often wondered how your son has grown.
Matt graduated from Port Neches-Groves High School in 1992 after spending a year in France as aforiegn exchange student. He missed out on his heart's desire to receive an appointment to the military academy so he enlisted in the Army to studya foriegn language at the DLI (Defense Language Institute) in Montery, CA. He studied Russian at DLI and than recruited for the US Military Academy at West Point.
Matt graduated from West Point in 1998, and went Aviation. After flight schoo; at Ft. Rucker, Alabama he flew Chinook helicopters, spending a year in Korea and then Afghanistan. In Afghistan, Matt participated in Facilitating the country's election by flying in ballot boxes. Matt was impressed by the extreme heat during the summer, telling me that while standing on the tarmac his feet were hot while wearing his flight gear. During their mission they noticed that most children were barefoot. He and other aviators delivered thousand ounds of (humanitarian aid) shoes to the Afghani children in a project the Chinook pilots dubbed "Operation Shoe Fly". Cathedral in the Pines, my home church in Beaumont, participated by mailing about a thousnd pounds of donated shoes. Pictures of those the children putting on colorful Desney character shoes are precious.
For the past three years, Captain Brown, has been blessed to be with the 25th Aviation Division stationed on 'Oahu, Hawaii. Last year ('06) he was in Kuwait and Iraq, ultimately to serve as commander of airtraffic control in the Tikrit area. Currently he is back at Wheeler Airfield, Hawaii serving as commander of the 25th rear detachment.
Next summer Matt is changing branches and will become a member of the foriegn Area Office returning to his "first love," foriegn languages. He will go back to school in California at the DLI for further studies in Russian and then will be assigned somewhere in Eastern Europe.
Matt is blessed with a beautiful wife, Melissa, and adorable daughter, Emma Katherine age two (my only grand baby and the newest love of my life). Melissa is the absolute perfect match for Matt... She is an understanding and poised (and tolernt) Army wife.
I was privileged to spend Christmas in Hawaii with Matt and family in '06. It was a great time and I cannot express how proud and blessed I amm to see my son living his life dedicated to Duty, Honor, Country and loving his family.
Life is good! 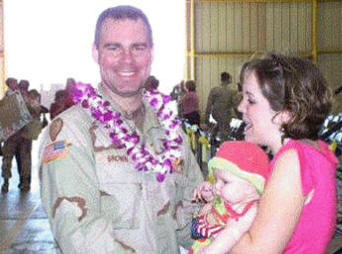 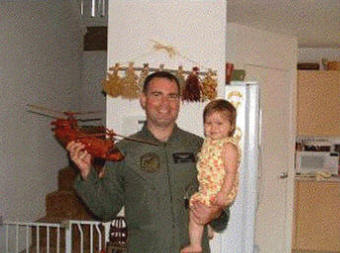 The model Chinook Matthew is holding is a birthday gift from his mom for his office. 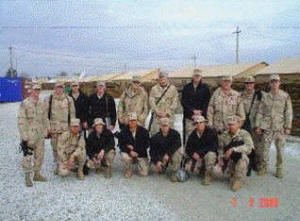 The officer group in Afghanistan, Matt is in sunglasses, 2nd from the right, standing. 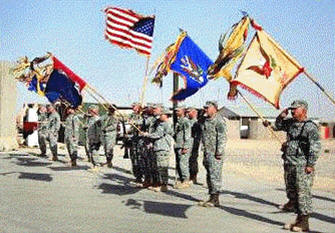 The changing of the guard in Afghanistan. The color guard and thehead honcho of the 25th Aviation ceremony (Matt is not in this photo)