You know a doctor is special when he is recognized by his peers. Dr. Gary Barbin of Waco Internal Medicine Associates is such a doctor, as the latest recipient of the Gold-Headed Cane Award. Barbin was honored at the McLennan County Medical Society’sannual banquet April 5 at the Phoenix Ballroom. The gold-headed cane has long been a symbol in medicine. The original cane was carried by John Radcliffe (1652-1714) and passed downfrom physician to physician. Each physician, at the end of his career,would identify a colleague of worth and bequeath the cane to him. The qualifications of the recipient include professional standing, good citizenship and personal integrity. For the past 13 years, the 450-plus members of the medical society have nominated a local physician for the award. Finalists are selected, and then society members and those in the McLennan County Medical Alliance (spouses of society members) vote to decide the winner.
During this year’s banquet, tribute speeches were delivered by Charles Herrin, Dr. Mark Schwartze and Dr. Ross Shipp, Barbin’s longtime medical partner and 2004 Gold-Headed Cane Award winner. Shipp had the honor of presenting the cane to Barbin. Custom-made canes are 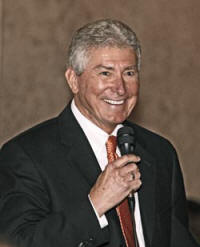 difficult to find, and previous winners received canes created by out-of-state vendors. However, Barbin’s cane was created by Brazos Walking Sticks in Gholson. Medical Society Executive Director JoAnn Felton said the cane is impressive. Barbin, 61, is a native of Port Arthur. He attained the rank of Eagle Scout and graduated from Port Arthur’s Thomas Jefferson High School in 1968. He attended Lamar Tech in Beaumont and graduated in three years with a bachelor’s degree in biology. While attending college, he worked as alab technician. He graduated from the University of Texas Medical Branch at Galveston in 1975 and completed an internship and a residency in internal medicine three years later. In 1978, he moved to Waco and joined the private practice of Waco Internal Medicine Associates. He began working along side Shipp and Dr. James Copeland, the 2011 Gold-Headed Cane recipient. Dr. Arthur Sudan later joined, and all four doctors remain inpractice together. In 2008, the partners joined Providence Health Alliance. While maintaining a busy hospital and office practice, Barbin has spent many hours volunteering on boards and committees. At Providence Health Center, he served on the board of trustees for nine years. He also served as president of the medical staff and chairman of the internal medicine section at Providence.
At Hillcrest Baptist Medical Center, he served as secretary of the medical staff and chairman of the internal medicine section. He was medical director of Waco Allied Health Organization. Barbin was president of the McLennan County Medical Society in1995. He also volunteered as team doctor for the Waco Wizards professional hockey club. He and his wife of 39 years, Jody, have three children: Lori, a pharmacist in Weatherford; Luke, an intellectual property attorney in Chicago; and Clay, a third-year medical student at UTMB. Barbin is a member of St. Louis Catholic Church in Waco and is along time supporter of St. Louis Elementary School, Reicher Catholic High School and other charitable organizations in McLennan County. His hobbies include all sorts of outdoor activities with family and friends, especially those that involve water. He recently completed the Waco Sprint Triathlon.